Below are the items released the week of October 4, 2019.

1. Pricing Bundles (Merchants): The team has launched the ability to give merchants discounts on subscriptions for a limited time. The objective of launching discounts is that it enables us as a company to experiment with price differentiation for our basic merchants giving them an incentive to upgrade to our premium plans. 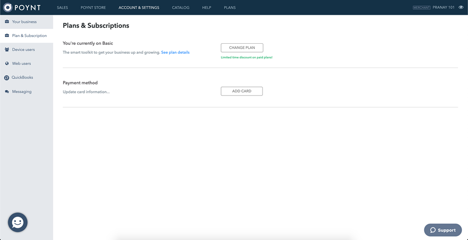 2. Poynt Capital (Select Merchants): Poynt capital interstitial and small advertisement. The objective of this is to showcase Merchant Cash Advance offers to qualifying merchants when they login to HQ. Out of 1700 merchants we are targeting in phase two, 930 logged into HQ in the last month. Hence we need to tap into HQ as a channel to communicate the offer to merchants. 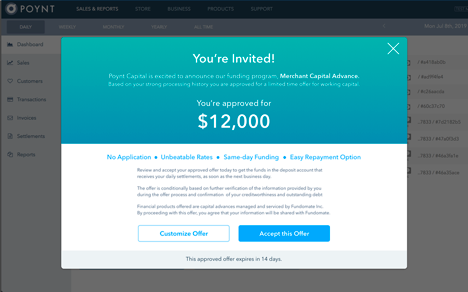 3. Reseller: Expose “fouroneone info”/“Last check in” info to resellers. Currently no way for Resellers to know which environment/locale their devices are pointing to.

5. PayFac Merchants (Pilot Merchants Only): Deposit Detail Report rounding is not matching up with Deposit Summary.

2. Merchants (TSYS merchants): Fix for EBT transaction issue. Falling back to track2data in case track1data is incomplete or broken.

3. Merchants (EVO merchants): Adding just additional logs to be able understand the problem the EVO issue where merchants are unable to void transactions on the terminal or on Poynt HQ. This is not the fix, just adding the logs to better diagnose the problem.

4. Merchants: (Merged missed changes and fixes for them). TenderCreditDebit bad flags value checked in during a previous commit.

7. Merchants: Reduce number of 400’s while saving orders (Phase 1) - default unitOfMeasure to EACH when it’s null in Create Orders API.

10. Merchants: (Merged missed changes and fixes for them) TenderCreditDebit bad flags value checked in during a previous commit.